THE FINDING OF MINES.

Mines are discovered in many ways. One hears much about prospecting, and since this is a practice which is rapidly changing from a mystical to a scientific basis, a few considerations will here be in order.

Persons who have lived in mining communities are familiar with two types of prospector, the roving and the settled. Somehow, when we think of the former, there comes to mind a bearded, roughly clad man, usually accompanied by a "jack" and both packing the outfit consisting of a few tools, a pan, some blankets, a gun, and a supply of "grub." If we have in mind the other type of prospector, we imagine him as living an isolated life in a log cabin up in the hills, spending his daytime in putting in a few, short drill-holes and blasting down a ton or two of usually worthless rock in a "tunnel" or shallow shaft, confident that each succeeding shot will disclose a treasure. 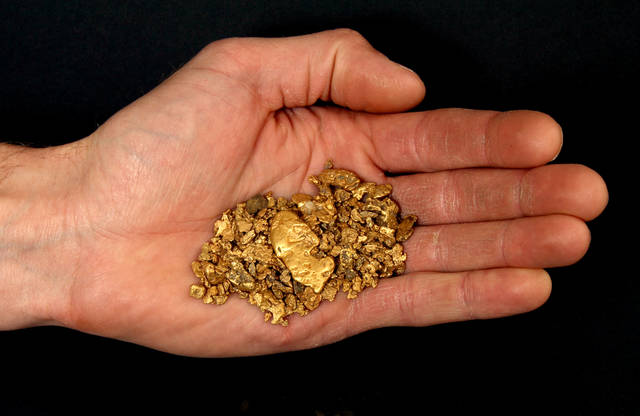 Both of these types represent the utmost in optimism. These men endure many hardships and privations, they can have little converse with other humans, often they can see no provisions for the next day; in fact, they receive few of the benefits of modern civilization—if we except the food-preserving features. Still, a typical, old-style prospector keeps on with absolute faith that fortune will smile tomorrow. We must reach the conclusion that these uneducated men are led on by subtle beliefs which, to a technically-trained man, seem like the rankest folly. They are diviners, dreamers. They are disappearing now and, a generation hence, there will be but memories of them. They are giving way to successors of a different type.

The newer kind of prospector is well educated, and, perchance, he is rather youthful. His chances of success are many times those of the man he supplants. Why? Because he is taking advantage of the work that has been done by all former prospectors. He is guided by theories deduced from observations through ages, and he has the advice of the best contemporary men of experience in matters of geology as applied to mining. In other words, he is a scientific prospector.

The prospector of today has a general understanding of mineralogy and geology; he must have knowledge of mining methods, so that he may know whether a deposit, once found, can be exploited at a profit; he must be ready to account for all discovered mineral bodies, and he must be capable of applying theories to actualities.

There are so many metals and minerals sought for the markets of the world today that we see there are many fields of study and practice open to prospectors. It is not the purpose here to explain the details of scientific prospecting, for the study of this one subject would, in itself, fill a volume. The object of the above remarks is to draw to the attention of the economist the propriety (amounting almost to a necessity) of giving heed to the findings of the educated, trained searcher for mineral bodies, in preference to those of the illiterate man who has furnished themes for artists, narrators, and dramatists, because of his quaint characteristics.

Some writers have classified mineral discoveries into Search, Chance and Adventitious.

Search discoveries, being the rewards of earnest seeking, it is not surprising that, under the past guide of notions and mysticism, the percentage of such discoveries has been small. Under the new order of things, with science as a guide, the percentage is growing and, in the future, this kind of discovery will undoubtedly strongly outnumber the others.

Chance discoveries are those that are made purely without premeditation. They have been a dominant factor in the mineral development of the past. The discovery of gold in California came about through the noticing of shiny, yellow flakes of metal in a ditch leading to a saw-mill. The great iron mines of the Mesabi Range were found by the ore clinging to the roots of an overturned tree. The Wallaroo copper mine, the greatest in Australia, was discovered by the green minerals brought to the surface in the excavations of a wombat. The famous Sudbury nickel-silver ore bodies were disclosed when making a railroad cut on the Canadian Pacific Railroad. The Reddington quicksilver mine, in California, was similarly opened in a cut for a wagon road. The mining of silver at Catorce, Mexico, followed the discovery of shining silver nuggets in the camp-fire of a native, who had camped right upon a rich outcrop. The Kimberly diamond mines are said to have been disclosed by the burrowings of an ichneumon, which fetched a brilliant stone to the sunlight.

Adventitious finds are such as occasionally occur when, while really searching for, or actually mining, one metal, discovery is made of a different metal, or possibly the same metal is found in an entirely different kind of ore. The Comstock lode of Nevada was originally a search gold discovery, the gold having been sought and found by two prospectors with ordinary gold pans. In their working to recover gold, a black mineral and a yellow sand were discarded from the pans and rockers. Curiosity of one man resulted in the identification of these two minerals as ores of silver which henceforth were held as valuable as the native gold. The Anaconda mine, at Butte, Montana, was located, and for some time worked as a silver proposition; but the values gradually changed with depth from silver to copper, until now silver is only a valuable by-product. The rich lead-silver ores of Leadville were discovered as adventitious to the operation of the rich gold placers in California Gulch. A heavy, troublesome rock which accumulated in the sluices, much to the disgust of the miners, turned out to be cerussite, a fine ore of lead. This same district now produces in commercial amounts gold, silver, lead, iron, zinc, copper, and manganese. The Treadwell mine on Douglas Island, Alaska, was first worked as a placer and the values were found to extend downward into the underlying rock in a place which proved to be an immense deposit of eruptive, gold-bearing ore.

As the old-fashioned, venturesome kind of prospecting has but recently been crowded off the scene by the better, scientific kind, let us not overlook the great discoveries that were made in the past before we had applied "organized common sense" to such a field of activity. Those original prospectors were searchers, hunters. They had no guides, but they did accomplish a great deal, and their discoveries were rewards for diligence and hard labor which were, to a great extent, often misdirected.