Let us consider the legitimate financing of a new or a reorganized, worthy, mining proposition. It is the universal custom to own and work a mine under the laws that govern a corporation and, for this reason, the mining man of the day is familiar with the practices of incorporating.

It is something of a question at the start to decide what is a fair price to fix upon a property as a whole—that is, to decide what the capitalization should be. There is no rule to be followed in this matter. Some organizers will decide to capitalize at what is expected will be the value of the property after some time. Other men will stick to the idea that it is the proper thing to capitalize for what the property will invoice at the time. The higher the capital stock, the greater number of shares there are for sale, usually. With a conservative capitalization, there may be fewer shares for sale, but each share is worth correspondingly more and the chances are much better for an advance in the price per share whenever the mine becomes productive. There are investors who will carefully investigate this feature and will shun any mining stock which has any appearance of over-capitalization. It would be well if all investors were to follow this precaution. 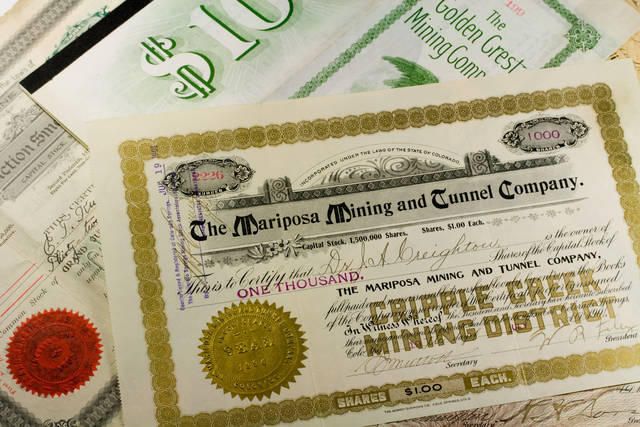 But what about the price at which to capitalize a prospect? By a prospect we here mean a property that has been favorably reported upon as worthy of development but in which, up to date, there is little, if any, showing of values or reserves. The engineer's report has recommended the property as containing the possibilities of a mine. How much is it worth? Can he or can anybody even roughly estimate the sum? An engineer frequently does fix the sale-purchase price of a property, but it is not so usual for him to decide upon a valuation for capitalization. A very good guess may be made, perhaps, if there are similar and neighboring properties which have been developed.

Assuming a prospect that has been reliably reported to the owners as possessing the earmarks of a mine and as warranting expenditures for exploitation, upon what basis should a company be capitalized? If the owners of the property have capital, the chances are that they will not care to share their holdings with other parties. But very frequently worthy "prospects" are held by men of no means, and in order to develop their mines the owners feel the necessity of coöperation with parties who can furnish working funds. In every such instance, there will arise this debate as to the proper basis of capitalization.

There is no human means of arriving at a close valuation of any prospect, so it becomes a matter of pure judgment as to future probabilities and the possibility of placing the stock at the most advantageous price. A company will, therefore, be stocked for some round number of shares, say 100,000, upon which some empirical par valuation, say $1, is placed per share. This is not to be understood as stating nor assuming that the property has a present valuation equalling the par of the entire capitalization. Who would assert that any mere prospect ever had such a value as $100,000? No, it is not the intention of the organizers to claim that the ground is worth the par valuation; but some start must be made and so, in the absence of something precise, round numbers are made to do service.

Stock is then offered at figures much below the par valuation and in such quantities as will maintain sufficient capital in the treasury of the new concern to get the property's exploitation under way and to so sustain it as to make the prospect grow into a mine.

If shares are offered at 10 cents, it does not mean that a prospect is worth even that valuation. It does mean (we are considering now only the operations of honest concerns) that the men who are managing affairs believe that the sale of so many shares at ten cents each will furnish adequate means for the development and equipment of the mine. Therefore, there is a prospective valuation placed upon all such enterprises.

Is an investment in such a company to be considered as gambling? If there have been sound assurances from reliable examiners concerning the likelihood of the ground carrying the essentials of a mine and the only uncertain element is the ultimate magnitude of the mine, then we might say that the investment is not a gamble at all, since there is no chance to lose. The purchase of such stock is a very sane investment and there is no telling what the returns may reach.

When incorporating a new company, it has become the fashion for the owners of the ground to exchange their titles for certain specified fractional interests in the company. This is effected usually by going through the formality of having the owners sell their holdings outright for the entire issue of the capital stock. Then, according to prearranged agreements, these owners donate to the treasury of the company a portion of this capital stock to be henceforth termed "treasury stock." The first step makes the capital stock "fully paid for," since it has been accepted in full payment for the property. The second step supplies the company with the necessary means for raising funds to develop.

There can be no reasonable objection to this practice. But there is much criticism of the usual apportionment of the owners' and the treasury stock. It is agreed that the incorporators are, as a rule, greedy in this respect, since they generally issue more than 50 per cent. (and frequently 60 per cent.) of the capital stock to themselves and expect to float the project to success upon the money derivable from the sale of the balance or treasury stock.

Is a mere prospect, even under the best natural conditions, plus the effort incidental to the organization of a mining company, worth one-half or more of a producing mine? During an extended experience in the business of converting discoveries into patented claims and prospects into mines, the writer has found that there is never an owner who is willing to sell a developed mine for twice the price he had set upon the original prospect. The valuation of his holdings goes up by greater multiples than mere doubling or even trebling and it is a rare thing to find a man willing to sell out a proved mine at less than ten times the prevailing valuation that would have been placed upon the same piece of property before its development.

Hence, there is no propriety in the act of self-appropriating half the capital stock by the organizers. Investors should be wary about taking interests in companies which have been so organized. If an owner believes that a mine is worth ten times as much as a prospect, let him be consistent and offer his undeveloped property for a tithe of the capital stock in the anticipated mine. If he has a worthy piece of ground, he will reap the same benefits as the holders of the stock who place their cash against his title to a tract of virgin territory. If he will not thus act fairly, it indicates either a questionable piece of property or an avidity undesirable in a partner. It is accordingly advisable to shun offerings in such concerns.

Another matter to be considered here is that of overloading a fairly good mining enterprise with so much capital investment that the property cannot be made to pay proper dividends and fair interest on the capital. Many worthy, though perhaps small, mining concerns have made failures through a disregard for this economic feature. The proper adjustment of this matter is a serious thing and it should not be passed over lightly. Investors should look into this phase of mining thoroughly.