The ABC of Mining

A Handbook for Prospectors

TREATING FULLY OF EXPLORATORY AND PREPARATORY WORK OF THE PHYSICAL PROPERTIES OF ORES, FIELD GEOLOGY, THE OCCURRENCE AND ASSOCIATIONS OF MINERALS, METHODS OF CHEMICAL ANALYSIS AND ASSAY, BLOW-PIPE TESTS, PROMISING INDICATIONS, AND SIMPLE METHODS OF WORKING VALUABLE DEPOSITS, TOGETHER WITH CHAPTERS ON QUARTZ AND HYDRAULIC MINING AND ESPECIAL DETAILED INFORMATION ON PLACER MINING, WITH AN ADDENDA ON CAMP LIFE AND MEDICAL HINTS.

Late of the Editorial Staff of "The Engineering and Mining Journal," and formerly a Crown Lands and Mineral Surveyor for the Dominion of Canada. 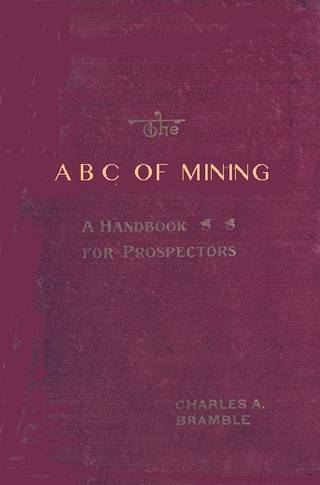 Owing to recent rich discoveries in more than one mining field, hundreds of shrewd, intelligent men without experience in prospecting are turning their attention to that arduous pursuit--to such this book is offered as a safe guide.

A complex subject has been treated as simply as its nature permitted, and when a scientific term could not be avoided, the explanation in the glossary has been offered.

A steady demand for this work has shown that it fills a want, and serves the purpose for which it was written. In issuing this second edition, a few compositors' errors that had crept in, owing to the author being in a very remote region while the book was going through the press, have been corrected, but no material changes in the text were found desirable.