Yet another fraudulent geologist have been exposed as dowser and a modern “witch” in Tanzania.

A fraudulent long-range locator device was used as fake metal detectors with claims to be able to find gold on distances such as up to 1000 meters on vertical and horizontal directions.

The long-range locator device manufactured in China and named Forward Gauss VR-1000B-II have been exposed as dowsing device which falls in the category of witchcraft and not a science.

The electronic circuits within the device detect no gold but are exclusively used to defraud people.

Owners of such devices collect money from gullible small scale and artisanal miners in Tanzania. A simple test in our garden have exposed the owner not to be a geologist but a simple clown.

A person claiming to be a geologist who is able to find gold on distances up to 1000 meter by using mysterious detector arrived to our headquarter in Geita, Tanzania on September 30th 2016.

The device presented was a long-range locator Forward Gauss VR-1000B-II manufactured in China. 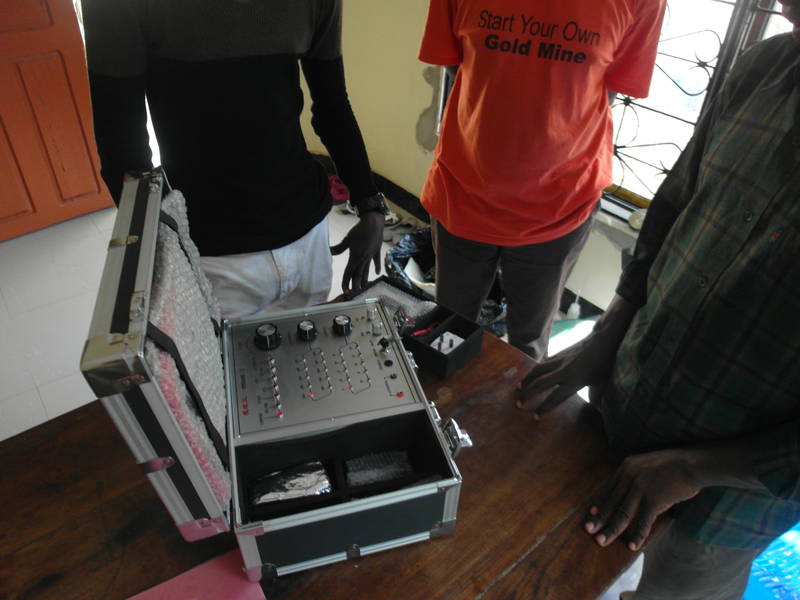 The device have unreasonably large control panel that simply does not fit into the 21st century.

The fraudulent long-range locator Forward Gauss VR-1000B-II is supposed to have the capabilities to find copper, silver, gold, precious gemstones, tin, jewels, and aluminum on horizontal distances from 100 to 1000 meter and vertical distances from 5 to 50 meters. 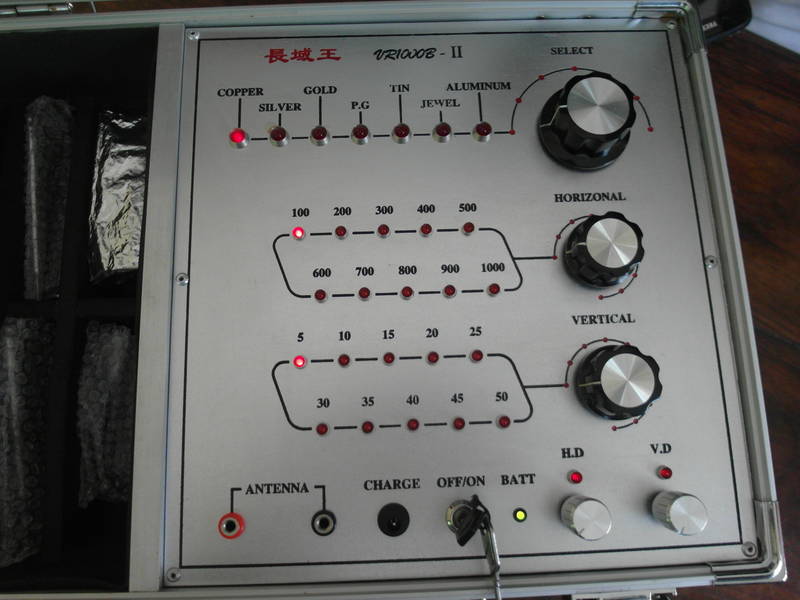 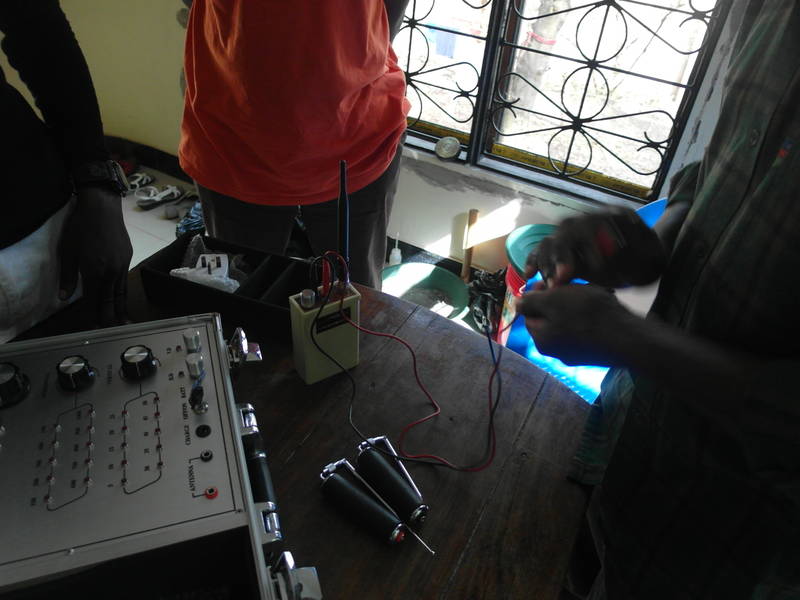 Before the self proclaimed geologist and in reality the witch dowser arrived to our location, we have placed one rock which surely had the visible gold inside of it into one of the bucket. As you can see on the video the rock with the visible gold inside was placed into the bucket number two. Some other buckets have been loaded with the simple rocks without gold just. You may see on the subsequent videos that the dowser was thinking to find the treasure and than he was disappointed to find out that those rocks were placed there to distinguish if he can find gold or rocks.

People involved have been our good friend from Kenya Mr. Victor Mollo and Tanzanian team member Mr. Laurence Sendeu and Mr. Jean Louis, mentor in the program Start Your Own Gold Mine.

Dowsing is type of witchcraft that is traditionally used to find water or minerals and buried treasure. It has no scientific basis and is nothing but a random chance.

Dowsing rods in the case of the fraudulent long-range locator Forward Gauss VR-1000B-II are not made of wood, they are rather modern and made out of the radio antennas. 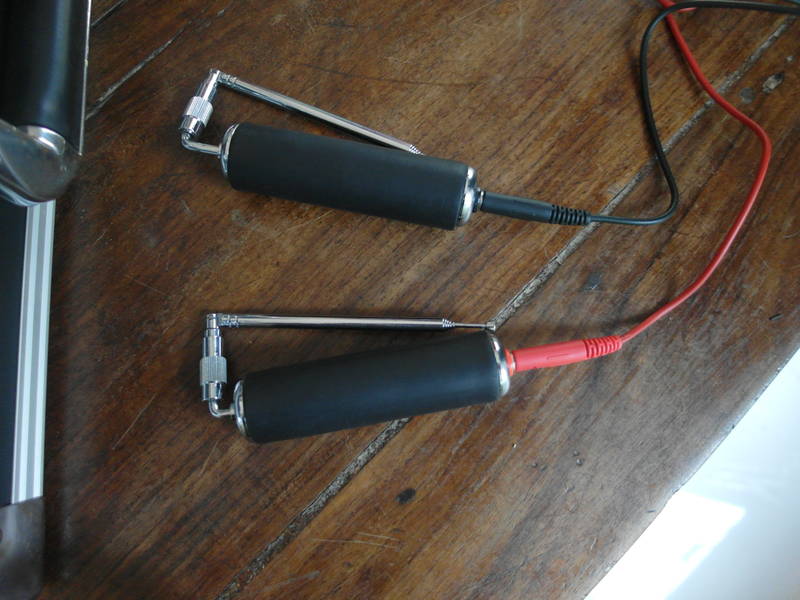 On this video you may see the witchdoctor and fake geologist explaining how the machine is supposed to work. We let him talk.

The device was placed in the garden, and the antenna was placed that was supposedly receiving the information from the device that was worn on the body of the dowser. We do not think that there is any real electronic or wireless connection between these two separate devices due to the very rough and simple looking fake electronics which we have seen. But we let it be for the time being.

Here below you may see Mr. Jean Louis in front of buckets without gold inside. We have placed some rock inside, just to give a false surprise to dowser who claimed to find only gold and not normal rocks. 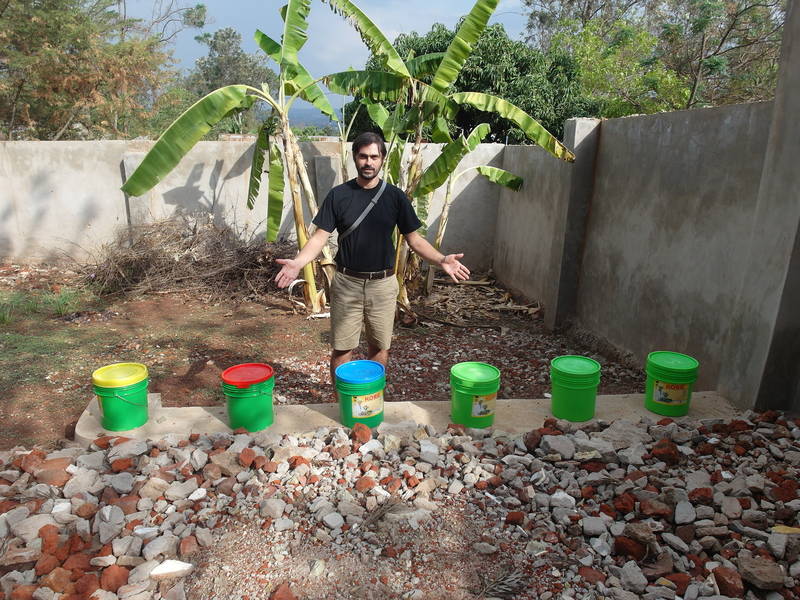 Only one bucket out of 10 buckets contains the gold rock inside. The dowser and witch that that claimed to be a geologist who can find treasure, gold, silver anywhere on distances up to 1000 meters was asked to detect the gold on just one meter distance. And he was ready to show us how his device work. 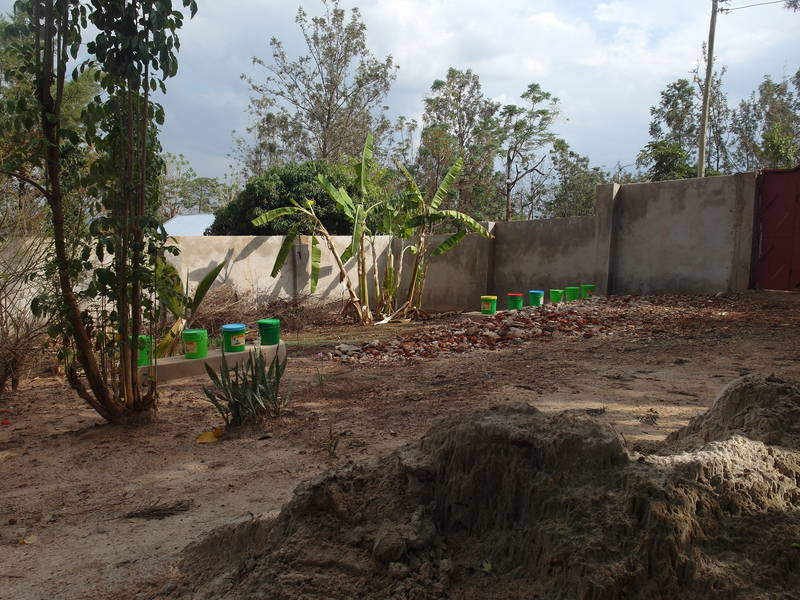 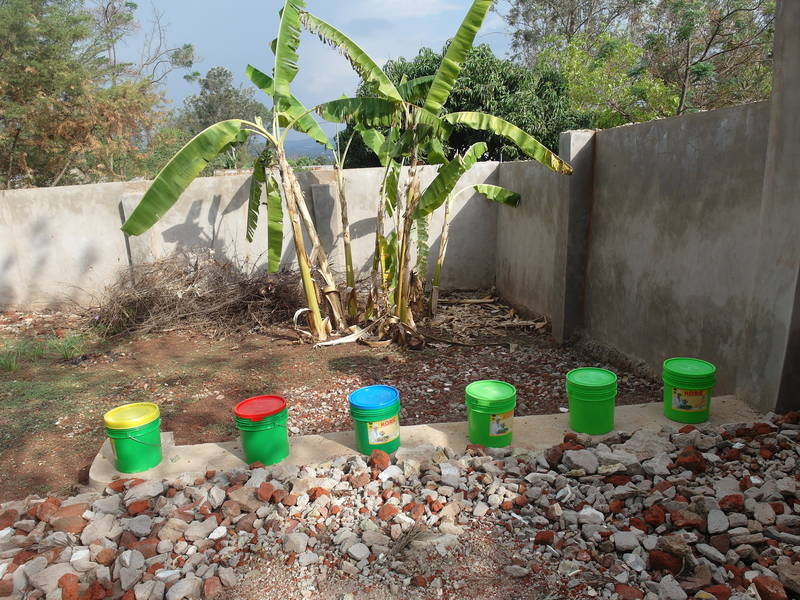 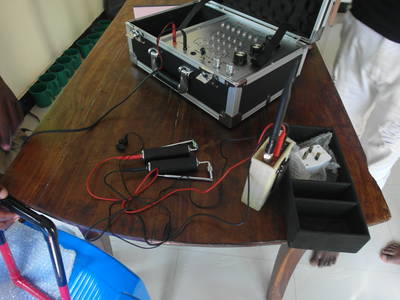 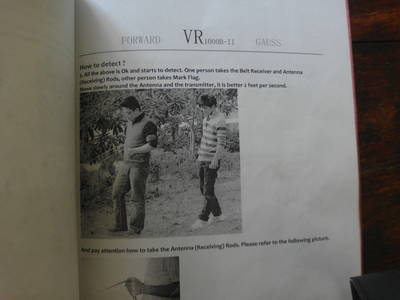 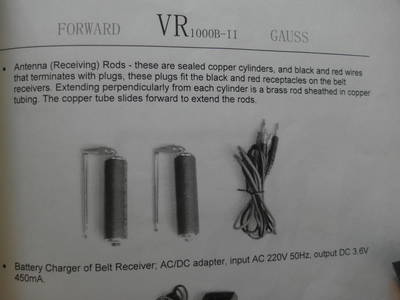 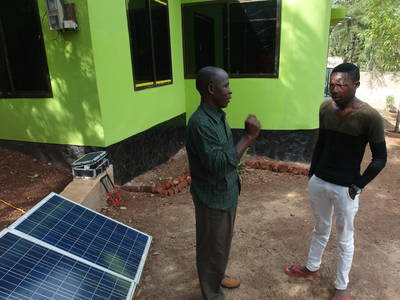 Modern dowsing rods in the hands of a magician

Mr. Jean Louis with the modern dowsing rods in the hands is showing how these rods can be moved into any direction by the slightest movement of the hands. They can be fully controlled by the dowser and are in no way controlled by any electronics or waves from the earth. On this page we are exposing the dowser and the dowsing device to be fake and fraudulent and not functional to find any gold not even on the distance of only one meter, unspoken from 1000 meters. 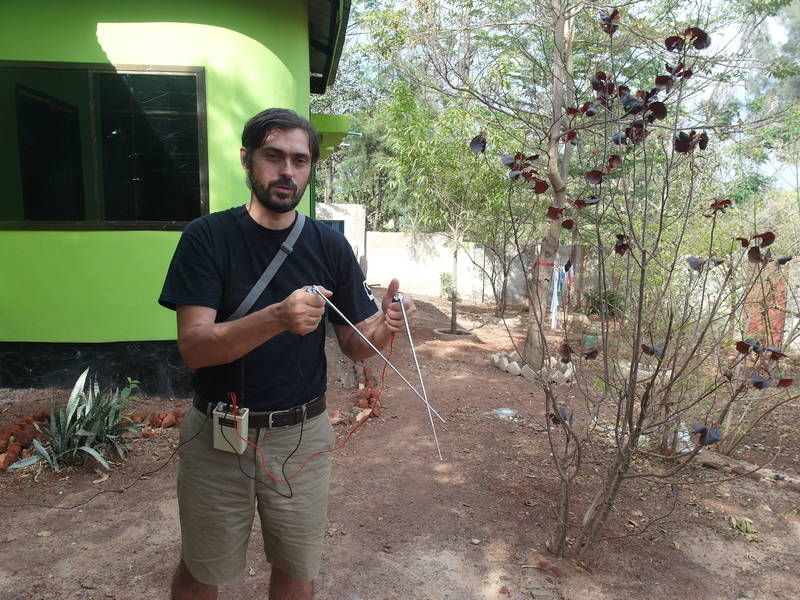 So many attempts, and the fake geologist failed to find the gold in the bucket

The dowser started dancing around, moving into one direction or other direction, he controlled his dowsing sticks without telling us by using slight movements of hands, and tried to convince us how his machine works. But yet he failed to find the gold that was placed in the bucket number two. He attempted multiple times to find the gold but he failed. The device long range locator Forward Gauss VR-1000B-II have exposed as dowsing device and the fake geologist have been exposed as fraudulent. We have warned him that any further attempts to sell such fake geological services are fraudulent and that he may be persecuted by the law. 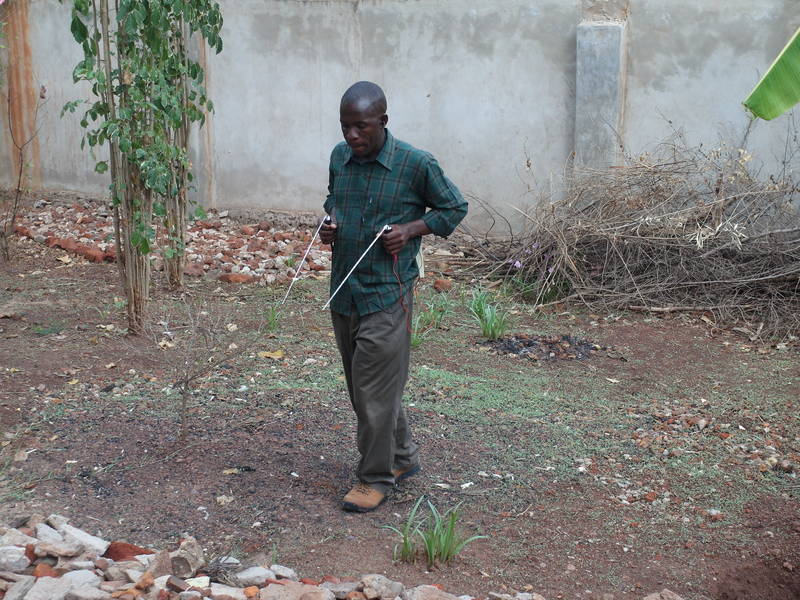 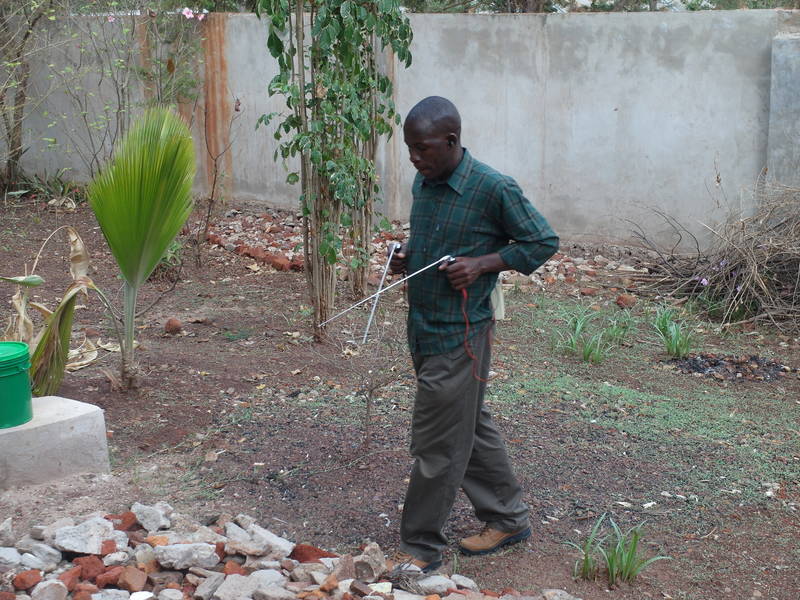 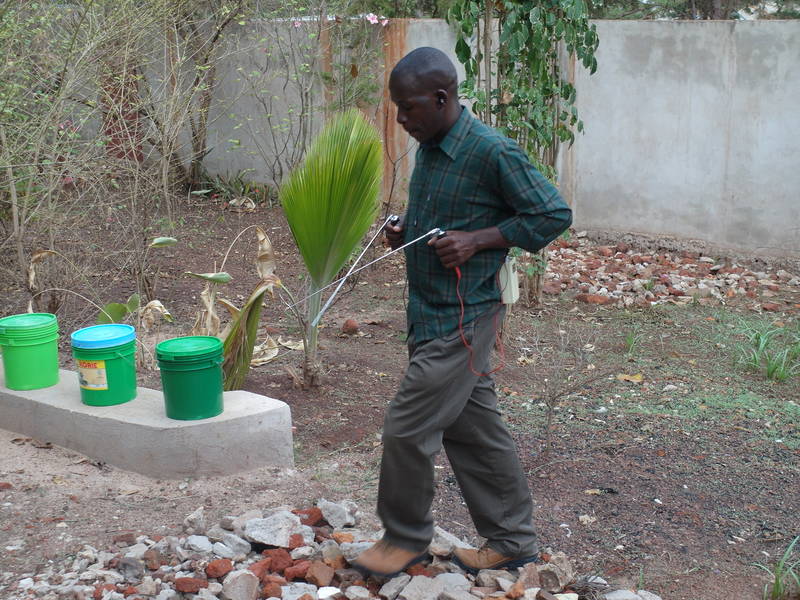 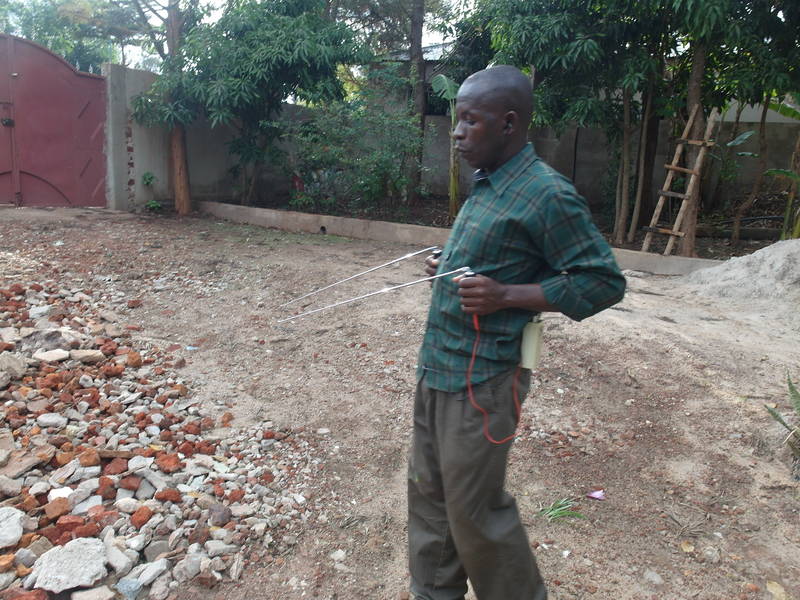 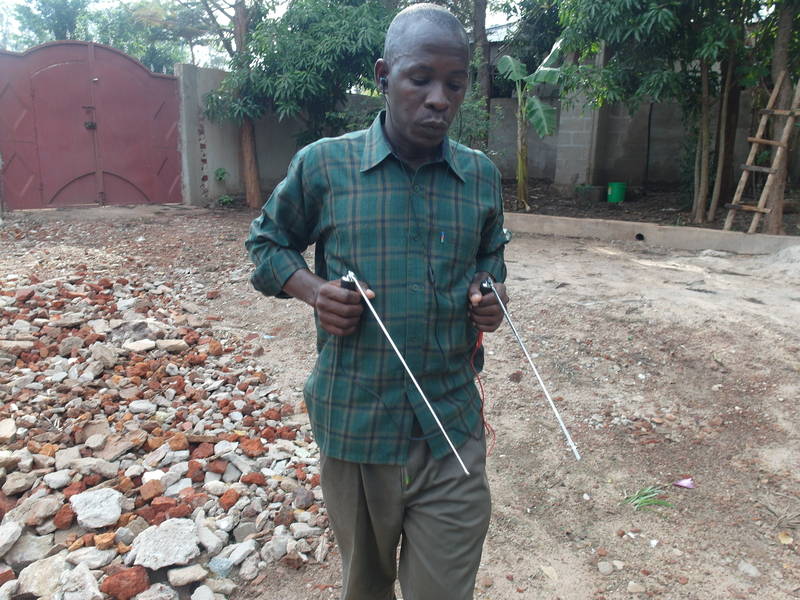 In fact, he proved that nothing works, and he even openly admitted on the end to be fraudulent and that the device is fraudulent.

Devices such as long-range locators are fraudulent devices. Persons like these are fake geologist who fraudulently obtain moneys for their services that does not work.

Gold cannot be found by using this type of a device.

Device in itself does not work and has no scientific geological application.

It is not a metal detector and cannot detect any metal.

This device falls into the modern witchcraft and dowsing.

You may talk by