It has been necessary, a number of times in this discussion, heretofore, to make mention of kinds of ore bodies. It is well, at this time, to get some fixed ideas concerning the leading types of bodies of minerals which are extracted as ores.

Because of the laxity in type differentiation which has prevailed among miners and writers, the same geologists who have framed definitions of ore, have also defined the various types of ore bodies. The definitions, having been accepted by the leading mining geologists and engineers of the present day, it is well for us to fall into line and to agree with the authorities in such matters. 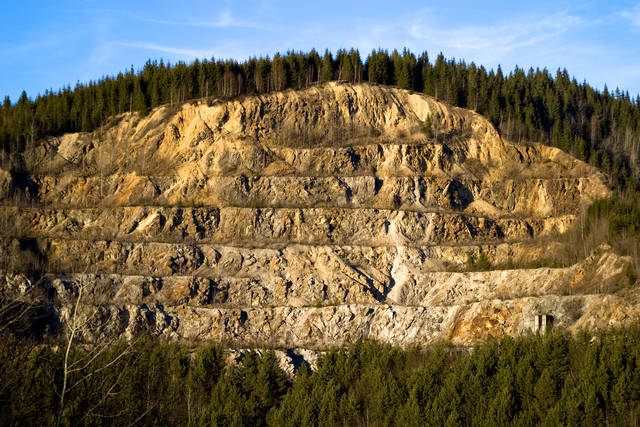 A vein is a single, ore-bearing fissure, generally, though not necessarily, with at least one well-defined wall.

When we run across a tabular-shaped deposit of ore that looks as though it may have been put into a pre-existing fissure or chasm, the chances are that it is a vein. But a vein must not be confounded with a dike. A dike is a filling that has been injected, while molten or fluid, into an open passageway or rupture across rocks, or into an opening which it created for itself. A little examination of the material should tell, to even the novice, whether or not the substance is of plutonic origin. The filling of a vein is not eruptive, at all. Veins have been filled from circulating aqueous solutions, by slow depositions, that have occupied very long periods.

A vein may be any thickness, since a fissure may have been opened to any width. Hence, a vein may be as thin as a sheet of paper, or it may be a hundred feet across. However, it is true that some wide veins have resulted by a sort of enlargement from original thin seams. Very few of the notable wide veins of the world are believed to have been created by the filling up of chasms originally as wide as the present ore bodies. But, in all cases of real veins, there were original fissures, fractures or crevices which acted as channels for circulating solutions that contained the materials which were left to make the vein matter.

A lode is an assemblage of veins so closely spaced that the ground between the veins becomes, in places, ore-bearing, and the entire width of the aggregation becomes an ore body.

A zone of sheeted rocks like schist or slate, if sufficiently mineralized to warrant mining, would be a lode. Sometimes, in certain districts, the earth's crust has been subjected to many approximately parallel, closely-spaced fractures, and by the subsequent filling of these cracks, with the accompanying corrosion of the walls and their replacement by ore, extraction of the entire mass of rocks across a considerable distance will be found to yield a profit. Any such body is a lode.

In the Cripple Creek District, the ground is criss-crossed in every direction by tiny fissures which have resulted from the contraction of the country rock, just as a bed of mud is fissured in the process of drying up after a rain. Wherever these fissures are found in aggregates that are closely spaced and in which a majority of the cracks have a general trend so that the whole assemblage can be readily worked as one mass, this whole body of fractured rock may be found worth mining and it will then constitute a lode. It may be mentioned here that the so-called ore of this district is not really ore according to the accepted definition. The true ore, the filling of these innumerable, tiny cracks, really constitutes but about five per cent. of the material that is shipped as ore, but which is principally the "country rock" broken down with the small volume of ore.

In legal phraseology, the word lode has come to include all sorts of ore bodies. When the word is thus used, in a legal sense, it should not be confused with the strictly technical meaning.

It has been the fashion for prospectors to dilate upon the fact that they have located "true fissure veins." This expression, formerly on the tongues of most mining men in districts possessing veins at all, is now obsolete and hence should be placed in the discard. There can be no such thing as an "untrue" vein nor an "untrue" fissure. Neither can there be any vein without a fissure. Therefore, if there is any vein, it must be a real or true vein. Accordingly, the verbiage is to be discouraged. The intention of a miner, in using this pet phrase, has been to convey the impression that his vein extended downward, indefinitely; there having arisen a notion that some veins are rather superficial and liable to "peter out" at slight depths, while others—the kind he invariably has located—persist both in size and value to extreme depths.

There are districts in which are found short fissures, generally confined to certain horizons in sedimentary rocks, such as the limestones of the great Mississippi Valley, from which are mined lead and zinc ores. These are called "gash veins." These are always readily recognized and there is not the slightest excuse for confusing them with the fissures which are common to other kinds of rock formations.

A bed or blanket vein is the term applied to any nearly flat deposit conforming to the bedding. Such a body of ore must be in a sedimentary series of rocks. Coal bodies are all of this type. Many bodies of iron ore are also of this type.

A chimney is an ore body which has not the tabular form of a vein but is rudely elliptical in outline, horizontally, and with a very considerable vertical extent. A stock is a similar body but it is of still greater irregularity of boundary.

These bodies are usually the filling of extinct volcanoes or geysers, and therefore they are presumed to extend to very great depths. The diamond mines of Kimberly, Africa, are of this type and the ore is a sort of hardened geyserite or mud in which are enclosed the precious gems. In Custer County, Colorado, the ore body of the Bassick Mine is a conglomerate of rounded boulders of all sizes cemented together, somewhat like concrete, by the materials which really carry the values. This mass occupies an ancient volcanic neck or throat of a geyser, probably the latter. The main portion of the Cripple Creek District is the crater of a great prehistoric volcano. It might be called a great chimney, but custom seems to limit the use of the word chimney to a smaller body such as might be included in a single mining property.

A mass is a deposit whose irregularity of shape is so great that it cannot be recognized as belonging to any of the types already mentioned. Masses conform to no rules as to shape or size. They are usually the result of a chemical dissolving of the original barren rocks with a simultaneous or subsequent substitution of valuable materials. There are many instances of ores that have been deposited, molecule by molecule, replacing equal volumes of the previous rock, much upon the order of the petrifaction of wood. Again, there are immense masses which are believed to have accumulated in caves already dissolved out of the containing rocks.

While recent geological study of the districts in which such ore bodies abound have disclosed numerous facts about their occurrence, there still remains much conjecture concerning their origins, and we may still believe that they do not conform to any rules as to regularity or size. The ore bodies of Leadville are of this type, and they may be described by the homely similes that they are as like and as unlike, and their occurrences are about as regular, as potatoes in a hill. The potato-tops give the farmer a suggestion as to where to dig. So, also, do certain geological relations guide the miner. And yet a shaft may be sunk hundreds of feet down among masses and not happen to penetrate a single one.

There are numerous recognized types of ore body not enumerated here; but it is sufficient for the average layman in mining matters to understand these few distinct types and to believe that all other types are rarities, and are, as a general thing, but intermediate forms of those defined.