THE MEN OF THE FUTURE IN MINING.

The mining of the future will probably be largely in the hands of young men. To arrive at any conclusions concerning the probabilities of success, therefore, we are obliged to recognize the dual conditions. In other words, there is to be an interdependence between men and mining. Up to this point in our discussion, we have dwelt upon the probabilities as viewed from the standpoints of natural resources and of human capability. In a certain degree, we have already covered the ground of this present chapter; and yet there are some points that must be given special consideration.

What is the true status of metal mining? Alarmists would have us believe that civilization is rapidly exhausting the world's reserves of available metals. Conservative investigation, however, repudiates such notions. The best that can be claimed for the reliability of such disconcerting statements is that they may apply in some districts, to some grades of some kinds of desirable mineral matter. 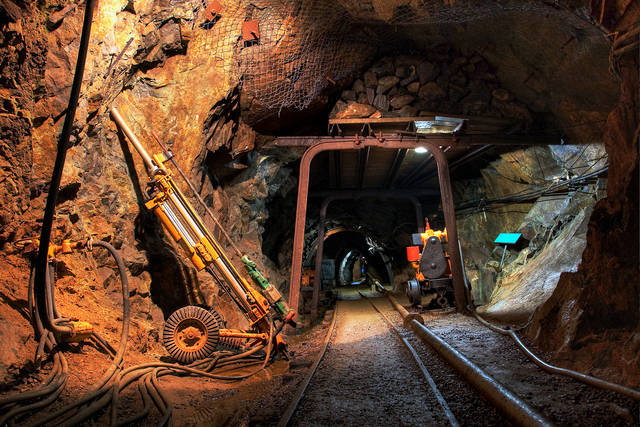 It may be true that the early miners have removed the "cream" from Nature's deposits in some districts, in the sense that they have skimmed off, as it were, the rich surface portions. But this does not signify the exhaustion of deeper ore bodies, nor does it mean that the pioneers were the only capable prospectors.

Why should we have any reason to deny the ability of present or future generations to find just as good mineral deposits as did our predecessors? Persons in some of the older of the western mining states—as for instance, Colorado or California—are apt to carry a misconception along this line. They can see a number of idle "camps" that are mere relics of former thriving mining communities and they are liable to jump to the conclusion that the day of mining at such places is past, forever. However, as we look at the subject in a more rational light, we shall see that there is no more authority for such an assumption than there is for one to the effect that a farm in the wintertime is a worthless proposition simply because, temporarily, it is not producing its customary summer yield. Just as Nature brings about changing conditions for the farmer, so will economic forces establish varying degrees of attractiveness to the miner.

It is unfair to judge one of the pioneer mining districts by its activity at the present time, if the productiveness happens to be small. Let us look for the reasons of the apparent decline. The chances are that the inactivity will be shown to be due, not to an exhaustion of ore bodies, but to some needed changes in mining or metallurgical methods. Very likely, under a readjustment of our notions about that particular district there will appear to be as great latent possibilities as ever cheered the earlier operators. The prospects may appear to be even better than this, and the future may appear to extend greater opportunities than were ever manifested in the past. Investigation may disclose great bodies of ore that could not be seriously considered in the earlier working of the region. In fact, speaking technically, the stuff in question was not ore at the time of previous operations, for it could not then be made to yield a profit. And yet, by introducing some changes in equipment or methods of working or treatment, there may be possibilities of making a great deal of money from an abandoned property; and the chances are good that this same profit may be won at a much more rapid rate than was ever before possible and that therefore the economic conditions are enhanced. For we must not lose sight of the fact that the greatest profits in mining usually accrue from the most rapid exhaustion of the ore bodies.

A mine, or even a whole district, may have been deserted because of failure on the part of original miners to recognize the value of certain minerals. The recent revival of activity that has been noted in Leadville mining circles is but an instance in point. In this district, miners have given a delayed recognition to some important minerals of zinc, and the indications are that Leadville has entered upon another of its eras of mining activity.

But, it is not necessary to restrict our thoughts to the old mining regions, for if we can observe how easy it has been to overlook valuable deposits in a country that has been subjected to severe mining work, for years and years, what must we conclude concerning the possibilities of the many and vast undeveloped areas in remote portions of the globe? It would seem that there is indeed very small cause for alarm about the exhaustion of the earth's metals.

No, it can be shown that mining, which is one of the very fundamental industries of the world and the one upon which every other form of commercialism rests, will be carried on with a continual increase in magnitude just as long as man exists. As the richer and more easily mined ore reserves of Nature are exhausted, improved and cheaper methods of mining, transportation, and treatment will be introduced and at a pace that will equalize this exhaustion. We, of the present generation, see the eminently successful handling of copper ores of grades so low that they were not given passing consideration ten years ago. The outlook would appear to be that the improvements in methods and costs will not only keep abreast of needs in such matters, but the probabilities are that they will take a very marked lead, with the result of a continually increasing scope to the mining industry. Let us then entertain optimistic views about the future of mining.

Now, as to the future of the young man who engages in mining there is just as much to be said as there is concerning the career of a young man in any other line of business. This word "business" is used advisedly, for the day is past when any person has a right to say that mining is anything but strictly legitimate business.

We look to the young men of the present and future to correct all of the shortcomings that have hindered the establishment of mining upon its deserved plane of stability in the minds of the general public. Young blood will take a lead in the dissemination of the correct thoughts about mining.

The successful man in mining will be, as heretofore, the one with the right qualifications in his make-up. Is a college education an essential prerequisite to success in mining? No, the writer is not one to declare that young men cannot succeed in the business without college training. However, there can be no avoidance of the proposition that the chances of the college-trained man are better than are those of the man who has not had the benefits of such a career.

To prove a success when enrolled in either of the first two classes, there is no denying the advantages of technical, mining education. The successful investor likewise will do well to make a consistent study of mining economics, and the more attention he gives to the many phases of approved modern mining, the greater will be his ultimate achievement, financially. Just as education along usual school branches is of immeasurable benefit to any man of business, so is it to the mining man. And in just as great ratio is the possession of innate business ability.

Education and natural ability are the two elements that will count in the future of any young man in mining.

Space might be devoted to the discussion of the possibilities of young men in the field of research work along scientific lines that would add materially to the economy and scope of mining. Such a career offers inducements looking to the achievement of honor as well as fortune. The field for such service is ready.