THE ANTIQUITY OF MINING.

Mining is believed to have been one of man's earliest occupations. In historical writings, many of which date back into antiquity, there are allusions, as well as direct statements, concerning the art and tasks of obtaining valuable metals from Mother Earth. We are told that the very ancient Egyptians made common use of metals and that they possessed knowledge of certain metallurgical and metal-working processes (as for example, the tempering of copper) which we, of today, cannot claim. Six thousand years ago Egypt became a world power through her mining of copper in the Sinai Peninsula. Iron implements found in the great Gizeh Pyramid are supposed to date back to 4,000 B.C. Copper tools have been found in the ruins of ancient Troy. In Assyria, a very good steel saw, 44 inches long, was taken from the ruins of Nimrod. Iron was utilized by the Chinese some 2,000 years B.C. Near Delhi, India, there exists an iron pillar, 22 feet long and weighing six tons, dating back to 400 B.C. It is chiefly interesting in exhibiting an ancient knowledge of welding which is the envy of our modern iron workers. If we accept the Hebrew Scriptures, we must believe that mining was carried on in the time of Tubalcain, spoken of in Genesis. The Old Testament contains numerous verses referring to the mining of metals, the land of perfect abundance being paraphrased in Deuteronomy thus: "Where the stones are of iron and out of its hills are digged mines of brass." Coal was mined and used in Greece in 1330 B.C. 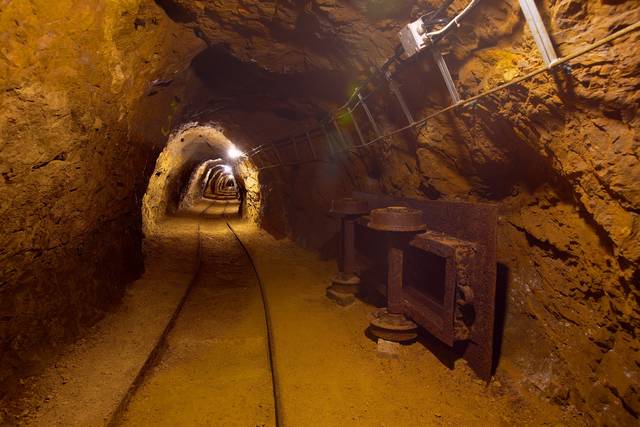 It is quite probable that gold was the earliest metal to be worked. There are two good reasons for this assumption: First, gold was to be found in the native state or as nuggets, thus requiring no reduction process. Second, the ores of gold are usually less refractory than are the ores of other metals. This is especially true of the oxidized ores such as would naturally be discovered by primitive man. These facts, together with the further properties of gold, viz., that its color is attractive, that it resists corrosion or tarnish, and that it is easily worked into ornaments or coin merely by hammering, make it highly probable that humans early made use of this yellow material.

We read in Job 28:1, that "gold is refined;" and modern investigations tend to prove that the Ophir of Biblical reference is the southern portion of Matabeleland or the Rhodesia of present fame among mining regions. It is possible and quite probable that the great quantities of gold used in the building and furnishing of King Solomon's Temple came from the vicinity of the present city of Johannesburg. The "golden fleece" of literature has been explained as a figure of speech for the skins of sheep which were laid in troughs to catch gold upon the principle of the riffle in a modern sluice-box.

Copper was perhaps the second metal to be worked by man. As a rule, it, also, is easily smelted from its ores; and, as above mentioned, we have relics that give evidence of wonderful skill in working this metal in times of remote antiquity.

However, other metals are believed to have been mined, upon commercial scales, before the Christian era. Silver and lead were handled in large quantities from the mines of Laurium, Greece, in the sixth century B.C., and the same mines are being worked to this day, the principal values now being in the lead rather than, as formerly, in the white metal. The Phœnicians, about 500 B.C., invaded Spain for gold, copper and mercury, and Cornwall for tin and copper. The Almaden quicksilver mines of Spain have been operated, almost incessantly, since 415 B.C., and in the 16th century, A.D., the wealth of Europe's greatest family of financiers, the Fügers, was based upon the operation of this remarkable deposit.

Del Mar, in his History of the Precious Metals, says, "Desire for the precious metals, rather than geographical researches or military conquest, is the principal motive which has led to the dominion of the earth by civilized races. Gold has invariably invited commerce, invasion has followed commerce, and permanent occupation has completed the process. It is the history of the past as well as of the present. Scipio went to Africa, Cæsar to Gaul, Columbus to America, Cortez to Mexico, Pizarro to Peru, Clive to the conquest and Hastings to plunder Bengal."

Our own day has witnessed the subjugation of the Boer. Because of Mexico's mineral wealth, many optimistic Americans are beginning to prophesy the annexation of our sister republic. For gold, Englishmen populated Australia in 1850, about the same time (1849) that we witnessed the rush to California gold fields. Spaniards settled Central and South American countries merely to gain the precious metals. It is mining which has been responsible for the population of the arid, southwestern portion of our own domain.

In this, as in every other age of the world's development, we shall find that the mining industry lies at the heart of all commerce. It is well for the student of mining economics to fully appreciate this fact, for it will whet his interest in this great world industry.

"Truly, it has been a great seeking and finding. The story of mining may have been staled by commonplace, and the romance of it dulled, often enough, by greed; yet, in the main, it has linked the generations of earth as with a golden thread—and if not golden only, then there has been the red glint of copper or the white sheen of silver. Mining districts may come and go, but mining remains."—(Editorial, Engineering and Mining Journal).