There is only one product of mines that has a constant market value, viz., gold. The precious metals, gold, silver, and platinum, are sold by the Troy ounce: the base metals are all handled and dealt with on avoirdupois weights. Copper, lead, zinc, tin, and nickel are quoted in cents per pound avoirdupois. Iron and manganese are curiously sold by mines to smelting companies on the ton of ore basis.

Since gold has been found in every known rock of every geologic age and is of world-wide distribution; since it possesses physical properties that long ago placed it at the head of the list of desirable metals; and further, since it does not occur in very condensed amounts, generally; this metal was selected as the standard of value by which the worth of every other commodity in the world is fixed. It must therefore be possessed of a fixed market value, and one never looks for quotations on pure gold. The price of pure gold is set at $20.6718. This very peculiar value is known as the "mint value," and is the price which the Government of the United States pays for all of its coinage gold. Among miners, as a rule, the price is thought of as $20 per ounce, and this is probably because this is more nearly the actual return the miner has been accustomed to obtain from companies who have bought and treated his ores. Most all the gold produced in the world is associated with other metals, such as silver, copper, or platinum, so that the bullion recovered in milling or smelting will usually contain the gold alloyed with such other metals and the gold is said to be not "fine," or pure. The fineness of gold in the metallic state is expressed in two ways. Jewelers have the carat system, while mints use the decimal system in expressing such degrees of purity. Pure gold is 24-carat fine. An alloy of 3 parts gold and 1 part copper would be considered as 18-carat gold. In the decimal system, pure gold is called 1,000 fine, and the various degrees of purity are then expressed in their true proportional amounts. Thus the same alloy as cited above would be called 750 fine gold. 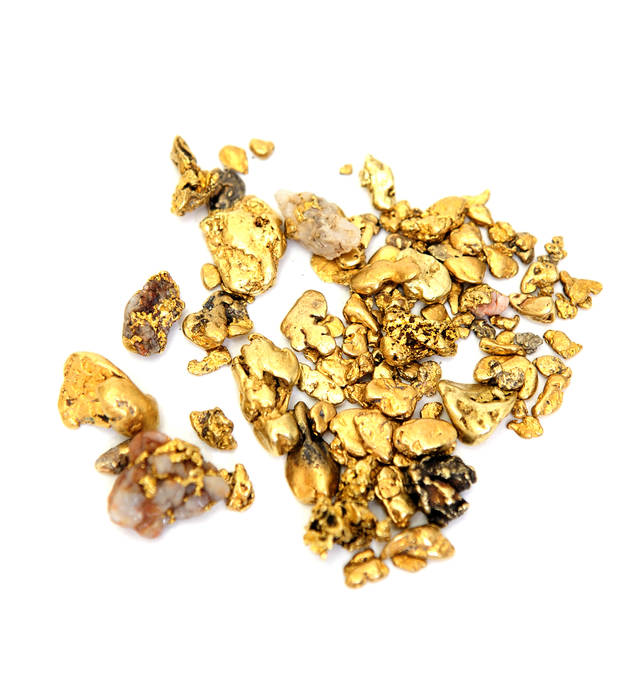 Silver has a fluctuating market value although attempts have been made, at times, to establish its value at some fixed ratio to the value of gold. In fact, a reader may occasionally run across statistics of silver production in which it appears as though there were a fixed value for the metal, but this will be found to be due to the use of what is known as the "coinage value," which is $1.29198. This figure will be recognized as our old acquaintance, "16 to 1," i.e., this price for silver being one-sixteenth of the fixed price for gold. There is actually no such fixation, and prices for silver are established every business day of the year in the great metal markets of the world, London and New York.

Platinum has been increasing in market value during recent years and the quotations have ranged up so high that it is now more than twice as valuable as gold. The reasons for this high price are that the production of the metal is limited, whereas the uses for the metal have been increasing. The greatest production of this metal is in the Ural Mountains of Russia, and the output from this region is handled by a few concerns who virtually possess a monopoly. These companies are able to maintain the production practically constant and to cause the market price to fluctuate.

Tin is found in commercial amounts in but very few regions. There is but one mineral mined as an ore of tin, viz., cassiterite, the oxide, which is 78 per cent tin. Tin is found in both veins and placers and the great bulk of the metal is now being derived from the latter type of bodies in the Malay Peninsula and the Straits of the East Indies. Formerly, Cornwall produced the world's supply, from veins. Although the United States consumes 35 per cent to 40 per cent of the world's production, the country does not produce 1 per cent of this production. Since the main source of our tin is British territory, the markets are controlled by London, and quotations are issued daily from that center. Such quotations are given in units of English money per long ton (2240 pounds) of metal. However, prices are also quoted at New York, daily, in cents per pound, and there is a real difference in value between the two quotations to take care of freights and duty. For instance, on a certain date, quotations were £190 10s, and 42c. The average price during 1911 in New York was 42.281 cents.

The chief supply of nickel now comes from the Canadian districts of Cobalt and Sudbury, where this metal occurs accompanying rich silver deposits. The metal is sold by the pound avoirdupois and prices in January, 1912, ranged from 40c. to 50c.

Tungsten is a metal which has been finding more and more uses of late years, but the production has remained quite limited. Three-quarters of the world's total production in 1911 came from a small district in Boulder County. Colorado. The quotations on this metal are given in dollars per ton of concentrated ore, and the price is for a certain percentage of WO~3~, the oxide of wolfram (tungsten). The schedule of prices announced in April, 1912, for Boulder County ores and concentrates provides as follows, a unit being understood to mean 1 per cent or 20 pounds per ton: For material assaying 10 per cent WO~3~, $3.50 per unit; for 20 per cent WO~3~, $4.40 per unit; for 40 per cent and more, $4.90 per unit. Ore containing, say, 50 per cent of the tungsten radical is thus salable at $245 per ton, the mineral itself thus bringing a price of 24-1/2 cents per pound.

Although copper is used and sold in very large lots commercially, it continues to be quoted upon the pound basis. The United States produces about 60 per cent of the whole amount mined in the world and the prices are made in New York daily. The amount of copper mined in this country in 1911 was 1,431,938,338 pounds and the price varied between 11.989 cents and 13.768 cents. There are always at least two quotations every day on copper, one being on "lake" and another on "electrolytic". By these terms are meant, respectively, copper produced in the Lake Superior region and the copper from other mines. The Lake Superior copper is the purest in the world and it always sells for a fraction of a cent per pound more than the other coppers which are refined by electrolysis.

Metallic iron is reduced from a number of different ores, but by far the bulk of pig-iron is made from the oxides and carbonates of iron. Such ores, in the United States, are obtained principally in Minnesota, Michigan, Wisconsin, and Alabama. As already stated, the quotations on iron are based upon the ores rather than the pig-iron, and there are two types of such ore recognized. If the ore is suitable for the making of Bessemer steel, it is given a certain quotation per ton, while if it cannot be used for such a purpose, it is given a non-Bessemer rating and is used for casting. The greatest iron-mining region in the world is in the Lake Superior country. Here are a number of districts that are known as "ranges." In some of these ranges mining is by underground methods, while in others the excavation is entirely in the open by the use of great steam shovels. The outputs of these ranges go by rail and water to the great smelting points along the Great Lakes and at Pittsburg.

The metallic zinc on the market is known as spelter. All quotations on this metal are given in two systems, the "pounds Sterling per long ton" and the "cents per pound." The average prices during 1911 were respectively, £25.281 and 5.758c. The American quotations are frequently given in the unit of dollars per hundredweight. This offers no confusion, whatever, for under this nomenclature, the average price for 1911 would be stated as $5.758. In the zinc-mining regions of the Mississippi Valley, the producers of ore have a practice of putting the mines' products through their own mills at the mines and making concentrates of the zinc mineral, which is usually blende or "jack," and this concentrated stuff is then sold to smelting companies at the daily quotations per ton of 60 per cent ore. During 1911 the average price paid in the Joplin District was $41.45. Since this amount bought 1,200 pounds of metallic zinc, it is evident that the miner received only about 3.45 cents per pound for his metal, the discrepancy between this sum and the New York quotation being consumed in costs of smelting and shipment and in profits to the middlemen.

Quicksilver is sold by the "flask" of 75 pounds. The price ranges in the neighborhood of $43 to $45.

There are numerous other metals, but the more common ones are given above. Below is given a graphical exhibit of the course of the prices of lead, spelter, standard (electrolytic) and lake copper, pig-iron, and tin for a number of years. A study of this chart is interesting in noting the waves or fluctuations that have covered periods of years. This chart is reproduced from The Engineering and Mining Journal.