A PRACTICAL TREATISE FOR PROSPECTORS, MINERS, AND STUDENTS.

MEMBER OF THE AUST. INST. OF MINING ENGINEERS;

AUTHOR OF "PRACTICAL MINING," "THE GENESIOLOGY OF GOLD," ETC.

This text was prepared from a 1898 edition, published by Charles Griffin & Company, Limited; Exeter Street, Strand, London. It is the second edition, revised. Numerous drawings and diagrams have been omitted. 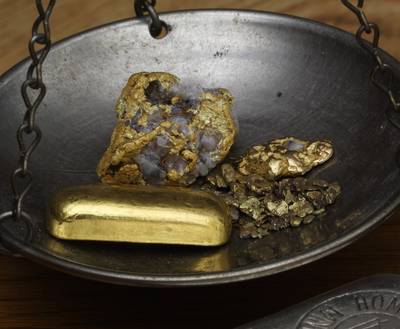 Some six years ago the author published a small book entitled "Practical Mining," designed specially for the use of those engaged in the always fascinating, though not as invariably profitable, pursuit of "Getting Gold." Of this ten thousand copies were sold, nearly all in Australasia, and the work is now out of print. The London Mining Journal of September 9th, 1891, said of it: "We have seldom seen a book in which so much interesting matter combined with useful information is given in so small a space."

The gold-mining industry has grown considerably since 1891, and it appeared to the writer that the present would be a propitious time to bring out a similar work, but with a considerably enlarged scope. What has been aimed at is to make "Getting Gold" a compendium, in specially concrete form, of useful information respecting the processes of winning from the soil and the after-treatment of gold and gold ores, including some original practical discoveries by the author. Practical information, original and selected, is given to mining company directors, mine managers, quartz mill operators, and prospectors. In "Rules of Thumb," chapters XI. and XII., will be found a large number of useful hints on subjects directly and indirectly connected with gold-mining.

The author's mining experience extends back thirty years and he therefore ventures to believe with some degree of confidence that the information, original or compiled, which the book contains, will be found both useful and profitable to those who are in any capacity interested in the gold-mining industry.

Contents of the Book: Getting Gold